Powerscourt on the ground at COP27

COP27, the annual United Nations Climate Change Conference, kicked off on Sunday 6 November in Sharm El-Sheikh, Egypt. I had the privilege of attending the first week of the conference, joining fellow climate and sustainability leaders in the fight to advance climate action.

The mood in Sharm this week has been one of optimism and urgency. While attendees and delegates are hopeful that we can still meet the Paris Agreement target to limit warming to 1.5°C,  they’re also acutely aware that we are rapidly running out of time. Speeches throughout the week have reminded us that we’ve entered the ‘decisive decade’. This means we only have eight years left to reduce emissions if we’re to avoid a climate disaster. UN Secretary General Antonio Guterres profoundly captured this sentiment by stating, “We are on a highway to climate hell with our foot still on the accelerator.”

Against this backdrop, here are my top two takeaways from the week:

Developing countries have had enough, with the ‘loss and damage’ debate dominating conversations. Leaders from countries in Africa and South America have been particularly vocal, demanding that wealthy countries pay the price for their contributions to climate change. The UK and a number of European countries have made loss and damage commitments, but attendees really want to see action from the US and China, the world’s largest emitters.

Pressure is mounting on the private sector to pivot from commitments to action. The COP27 slogan is “Together for Implementation”, a message which has been repeated several times throughout the week. Many speakers have reflected on the fact that we’re facing rampant greenwashing by corporates, and that it’s time to deliver on targets that have already been set.

With a week left of the conference, there is still plenty of negotiating left to happen. I’ll be providing daily COP27 updates, which you can sign up to here. For more on my thoughts from my week in Sharm, listen to the latest episode of Powerscourt’s Friday Fix here.

POWERSCOURT AND FLEISHMANHILLARD APPOINTED BY LANDSEC FOR MAJOR CORPORATE BRIEF

POWERSCOURT WEBINAR: COMMS AND THE COST OF LIVING 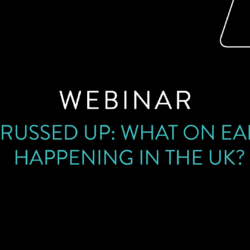 POWERSCOURT WEBINAR: All Trussed up – what on earth is happening in the UK?